The oldest known western terrestrial globe was made in 1492 by Martin Behaim of Nuremberg , and it reveals a gap in the Earth's land surface. In the same year, Christopher Columbus, setting out West from Spain, landed in a region that he thought would be the East Indies, but which was soon to be realized as land in the `gap' on Behaim's globe. The vast continent of North and South America had, until 1.492, been unknown to the peoples of Europe and Asia .

The enormous excitement aroused by the discovery of Columbus can only be likened to the landing on the Moon by Neil Armstrong and Edwin Aldrin in July 1969. Films, models, diagrams, maps, and globes of the Moon and the space machine's journey parallel the stories, woodcuts, charts and globes of the sixteenth century.

Globes are among the most ancient scientific instruments known. Their history extends more than a thousand years and still today globes are being produced in large numbers. A highly important contribution to the development of the globe was made in the second century AD by the Alexandrian astronomer and geographer Claudius Ptolemaeus. (or Ptolemy). In his main works, the Almagest and the Geography, for the first time (as far as we know), he describes a precise scientific method of fixing the position of a place on a globe by using so-called spherical coordinates, i.e. the longitude and latitude of a place on earth or the (ecliptic) longitude and latitude for a place in the sky. Such coordinate systems are the foundation on which all later scientific globes rest.

The word ‘globe’ is derived from the Latin word ‘globus’, meaning sphere. Since the sixteenth century ‘globus terrestris’and ‘globus celestis’have indicated spheres representing the earth and the sky. Until far into the nineteenth century, the two types were always sold together as a pair.

The Terrestrial globe:
A terrestrial globe is easiest to conceive as a model of the earth. Such a model has a few striking advantages in comparison with maps or atlases. All places on earth are in there correct positions to one another, the shapes of continents and oceans are according to reality and the superficies are presented in there correct proportions. A map has only one of these three qualities at the most.
The terrestrial globe became a symbol of scientific curiosity and open mindedness to the world. It could leave the scholar’s study and be adapted for the needs of gentlemen. Some globes were produced to accompany the return of explorers and their surfaces show the maritime routes they followed.

This method of representing the sky is called external, contrasting with the geocentric method where the sky is represented as it is seen from the earth. A remarkable consequence of the external projection on celestial globes can be found in the artistic representation of constellations, seen as persons, animals and objects since Antiquity. According to most celestial cartographers it was only logical that these persons, and some animals, should turn there faces towards the sun. In the external projection we look at there backs.

A symbol of knowledge but also of power, the celestial globe became an attribute of Roman Emperors, emblematic of their dominion over a universal empire. This symbol was taken over by the Holy Roman Emperors who added a cross above the sphere. No major figure of astronomy followed Ptolemy and the science of the Classical World was recorded in writing and transmitted by Byzantine scribes. But the new Christian religion was wary of this branch of science which it considered too close to astrology and paganism. It was to be Arab scholars, through the Islamic conquests, who revived astronomy starting in the VIII th and IX th centuries. The great Classical authors such as Euclid, Aristotle and Ptolemy were translated and made widely available and important cultural centres flourished from to . Some astronomers such as Albumazar
( Abu Mashar 787-886 ) or Al-Sufi ( 903-986 ) became famous in Christian Europe.

Planispheres:
Unrelated to the Islamic world, the first Western maps of the Heavens or planispheresbegin to appear in the IX th century. They seem to derive directly from the Late Empire. Throughout the Middle Ages, these diagrams were copied from abbey to abbey by anonymous scribes. In Reims , Gerbert d’Aurillac ( 946-1003 ), later Pope Sylvester II, made use of different instruments in his teaching of astronomy and invented a wooden celestial globe painted with circles. It was in that astronomy passed from the Islamic world to the West through numerous exchanges among Arab, Jewish and Christian scholars. In Toledo , from 1140 to 1185, Gerard of Cremona tirelessly translated the great Classical authors, especially Aristotle and Ptolemy, from Arabic into Latin. The first Western map of the Heavens which includes the stars and their coordinates, the Vienna Manuscript, dates from around 1440 and is kept in the collection of the Österreichische Nationalbibliothek in Vienna . Although the origins of this map are unknown, it served as a source for the first Western celestial globe in engraved metal executed in 1480 by the scientific instrument-maker Hans Dorn, now kept at the Jagellon University in Krakow.

Planetaria:
Planetaria is a general term for three-dimensional models of the solar system or of the earth, the moon and the sun. The three major types of planetaria are the tellurian (tellurium), the orrery and the armillary sphere.

The Armillary sphere:
An armillary sphere is basically a skeletal celestial sphere with a model of the Earth or, later, of the Sun placed in the centre. It is useful as a teaching tool and as an analog computer for solving various astronomical problems to a crude degree of accuracy. Armillary spheres were developed by the Greeks in antiquity for use as teaching tools. In larger and more precise forms they were also used as observational instruments, being preferred by Ptolemy. Armillary spheres became popular again in the late middle ages. With the advent of the Copernican model of a Sun centred Universe pairs of spheres contrasting the Copernican and Ptolomaic models became common teaching/demonstration tools. Such small teaching spheres remained popular through the nineteenth century.
The Armillary sphere consists of two major components, the sphere and the stand. The heart of the Armillary sphere is the sphere itself, which was often made and used alone. Renaissance painters frequently show spheres on handles in paintings of scholars etc. The central body in the sphere represents the Earth, which was, of course, considered the centre of the Universe. The colures and the Equator (the rings defining the sphere) represent the firmament, that is, the sphere upon which the fixed stars reside. The band going around the sphere, at an angle to the equator, represents the zodiac. The line running through the middle of this band defines the ecliptic, or the path followed by the Sun through the sky. The width of the band is ideally about ± 9 cm. to include the wandering of the Moon and planets above and below the Sun's path. The various constellations of the Zodiac also fall along this band

The Printed Globe:
The arts of wood cutting and copper engraving developed very quickly in Europe in the fifteenth century and, since map making is a graphic art, it is not surprising that these techniques were soon applied to it. In 1477 the first edition of Ptolemy's Geography with printed maps was published. It was far less logical, however, to use such reproduction methods to make globes.

The earliest European globes were made of wooden or metal spheres. In the former case the sphere was clothed with linen or pieces of vellum on which the relevant geographical or astronomical pictures were painted or drawn. When metal spheres were used the cartographic images were directly engraved on the surface. Wood and metal were also, and for a long time remained, the basic materials for suspending the spheres. Consequently, the manufacture of globes was initially carried out by artisans such as silversmiths and instrument makers.

Yet, still in the early stages of development in European globe making these traditional methods were to be replaced by a totally new approach, the printed globe, which during at least three centuries became the typical European method of globe making. From then on the production of globes often, though not exclusively, was carried out by map makers and publishers.

As is the case with many early inventions, it is not known precisely how and where the idea of using the printing press for globe making arose. The whole idea may have evolved from attempts to cover spheres with parchment strips. . The first published account of the construction of globe segments appeared in a small treatise on geography by Henricus Loritus Glareanus (1488­1563). in 1527. He proposed a set of gores such that the shorter size equals one twelfth (the equivalent of an angle of 30°) and the longer size one half (the equivalent of an angle of 180°) of the circumference of the globe. It is unlikely that this prescription for constructing globe gores was ever used in reality because then the boundaries of each gore would have to shrink while being pasted on the globe surface. In order to fit a gore to a spherical surface some amount of deformation is necessary because it is in principle impossible to represent a spherical surface on a flat piece of paper. Globe makers using paper gores must have discovered rather quickly that stretching paper is much preferred to shrinking it. This implies that the longer size of a segment always has to be a bit less than half the circumference of the globe.

Globe gores were already in use some time before Glareanus first published the idea. The oldest known set is that of the so-called Waldseemuller gores, dated 1407.  No original mounted copies of these gores exist. The earliest copy of a mounted printed globe is dated 1515. This is a terrestrial globe made by Johann Schoner (1477-1547). Although Schoner started his career as a priest, having studied theology in Erfurt , he soon assembled a printing shop in Bamberg . In 1515 his Lliculentissimn (Iuaednrn terrac totius descriptio ... cum globis cosmogrnphicis and in 1517 his Solidi et sphaerici corporis sivc globi astronoinici canones appeared in Nuremberg . In his own printing shop he cut the woodblocks for his globes. From a letter dated 1517, we know that Lorenz Beheim (1451-1521), a humanist who after a stay of twenty-two years in Rome settled in Bamberg in 1504, bought from Schoner a celestial globe, suitable for astrological use for two and a half guilders. Clearly by then Schoner had finished a pair of globes. Johann Schoner deserves the credit for being the first globe maker to produce pairs of celestial and terrestrial globes of the same size. Thus a new tradition was introduced in cosmography in which descriptions of the Earth and the heavens were united through globe making. Nuremberg was the place par excellence in those days for novelties such as printed globes; it was therefore the ideal place for the poverty-stricken Schoner to offer his globes for sale. From his workshop in Nuremberg a number of copies, terrestrial as well as celestial globes, have survived . All these date from the 1530s.

Those made by Schoner have been the most influential. Their fame spread through Europe quickly as is clear from the fact that the celestial globe in the famous painting by Holbein painted in 1733 in London can be identified as one of his . Of great importance for the historical development of globe making has been the interest stimulated by his globes in the Low Countries . 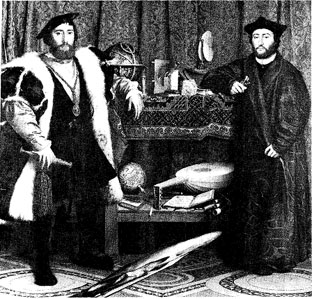 The terrestrial and celestial globe depicted in The Ambassadors by Hans Holbein.Jr, 1533
London, National Gallery.

His book on globes was reprinted in Antwerp in 1526-27. And because the demand for Schoner's globes was so great, the local production of such globes was taken up by the Louvain goldsmith and engraver Gaspar van der Heyden (c.1496- after 1549), at the initiative of the Antwerp publisher Roeland Bollaert. It was in Louvain too, that the next important stage in making printed globes took place, a development with which the names of Gemma Frisius (1508-55) and Gerard Mercator (1512-94) are connected.